Lessons from a fox: On beauty

July 16, 2017
A fox family lives on our land. We became aware of them early this spring. It began with a kit standing clumsily by the door to our house. We were drinking our morning coffee and could not believe our eyes. The little thing was adorable, slightly smaller than our cats. Over the next few weeks and months, we met the rest of the family: two additional siblings and the parents. Our land is abundant with food, cherries and mice, so the foxes stayed. They must have quickly learnt that we were no threat to them, because with every day, they became more and more brave. They would see us standing at a relatively close distance, look up and continue doing what they were doing. Observing them became our daily (or rather nightly) activity. They were beautiful golden/red foxes with healthy looking fur. 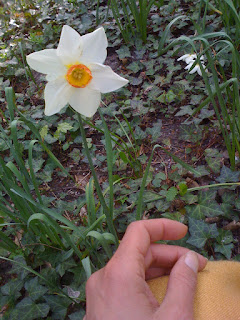 One afternoon, after a storm; a new fox made an appearance on our terrain. Given his size, we could tell that it was a male. He was not of the fox family. His fur was unevenly patched with what looked like brown, white and grey.  Unlike our foxes, the stranger fox was quite ugly.  As soon as I saw him, my hairs went on end. He was dangerous, I could sense it. I quickly opened the door and made lots of noise to let him know that he was unwelcome. Shortly afterwards, I was confronted with my prejudice.

The fox did nothing but walk across the driveway. He did not exhibit any aggressive behaviour. There was absolutely no reason to label his as 'dangerous.' No reason, except for the fact that he was ugly. How unfair, I thought to myself. How biased.

I am not a superficial person and have always prided myself on being able to see beyond the outer layers. I was never overly considered with beauty and never described people based on how they looked. And yet, there I was, accusing the poor fox of evil when his only fault was the way he looked. Was this a hard-wired human prejudice? (Note: while I recognise the role of the 'media' in defining and complicating the problem of beauty, I will not here address it.)

Based on the representations and descriptions of gods and saints, devils and demons, it would seem that humans generally associate beauty with goodness and ugliness with evil. This has been researched in the social sciences and seems to hold true.

I recall a study from my university years which tackled this issue. The references I have forgotten (Give me break, that was more than twenty years ago, so you'll just have to take my word for it, or look it up yourself.) The study aimed to determine whether beauty affected our perception and judgement. Beauty is of course subjective, but there's always a way to 'measure' things in science. The researchers defined beauty based on the symmetry and proportion of facial features. A group of elementary school children were asked to identify their best teachers (the most competent and kind.) The results showed that the 'beautiful' teachers were rated as better than their less beautiful counterparts. So, the conclusion might be: we are biased to beauty (or rather to symmetrical and proportional features.)

When we see something or someone whom we deem as pleasant/beautiful, our eyes dilate and we get an instant smile. We might not think it affects our judgement on the person, but it does. The person receiving this attention reacts to what is reflected to them (noting that little girls are more at risk of this than little boys, they even hear it: 'What a pretty little girl' ... 'what a beautiful dress' ... etc. While boys are more often judged on their behaviour (and strength.) So, basically, from the moment we are born, we are made aware of where we stand on the spectrum of beauty and that affects how we relate to the world and how the world relates to us.

We all know that beauty or outer appearance are not a judge of character, and yet, appearance can not be underestimated. I have talked to both women and men who admit that - in addition to being 'competent' - their pleasant appearance served them in achieving their aims. Not to say that beauty is everything, but 'being pleasant to look at' does not harm when applying for a job. This might seem obvious in occupations like modelling and acting, but it also applies to secretaries, waiters, and even politicians... being the 'face' of a company or the face of a country.
Thus said, I have also talked to women who viewed their beauty as an obstacle. They had to work hard to let employers and colleagues look beyond their outer appearance. They were not just beautiful, they were also smart.

Is it then an advantage to be beautiful or not?  Could it even be a survival mechanism?
Are 'pretty' girls are more susceptible to harassment on the street? Is there a correlation between beauty and rape?
I do not know, but a story from Arab folklore comes to mind. It has to do with the first woman to wear the niqaab. According to the legend, the woman was of such great beauty that she was constantly taken as a concubine by kings and rules and occupiers. Eventually, she decided to cover her face and body entirely so that no one could see her beauty and thus to protect herself from being taken as captive.

So, is the prejudice to beauty hard-wired in our mind? I would like to think it is not, or that if it were, that we we could re-wire it. Perhaps it begins with simply questioning our 'initial judgements' on people (and in my case, foxes.)

Popular posts from this blog

November 06, 2009
The wind doth deceive me and your voice I hear in the tree shrubs Possessed am I with your eyes They pierce my womb and into earth's core I fall to your embrace عشقٌ وجنون Smile to me For you I set my eyes on fire With the lashes of your eyes Hide me in the wallpaper So I can stay near you Unseen
1 comment
Read more

Challenging Tradition in a Traditional Society #1

March 18, 2009
There are some traditions that are worth upholding, but many have collected thick layers of dust so opaque that we can no longer see what was once beneath them. We mistake the dust for the essence, incessantly complaining about a'raf and wajibat, the rights and wrongs of our forefathers...but we play along to avoid ridicule and choose the chains of cowardice, prejudice, and misconception. Ignorance. I am not saying that all traditions are outdated and useless-far from it, in our Arab culture are jewels and treasures, and I am the first to call for preserving them. But let us stop for a moment and consider what we are heeding, rather than following blindly like grazing sheep. Sheep and goats: I am reminded of kindergarden and a song we learnt in school. The teacher would walk around the classroom singing: Ya Ganamati . And we'd respond: Ma Ma . ...Ghannou waraya : Ma Ma ..and so on and so forth. Very endearing, but also very telling. We grow up, Ma Ma-ing until we reach the
1 comment
Read more

The elections: A short lived drive ....

November 05, 2010
Disclaimer: I'm paraphrasing and making generalizations. "Voting is not a right, it is a duty!" I sign out with a slogan, to later realize that I missed the registration deadline and therefore can't vote, neither 'present' in Jordan nor 'absentee' in the US. My political naz3ah came too late. "Nonetheless," I told myself "I'll still follow up on the local campaigns, to learn about the political games." But overnight, and as the landscape of the city changed, I was completely turned off. My political naz3ah did not last too long. At first, I was entertained by the ludicrous slogans, photoshopped pictures and contrived smiles. It made traffic bearable, and even amusing at times. Some confirming the unspoken divides and others playing the religious card; slogans with questionable connotations, and my favorite, "nothing to say". I take my hat off. The woman jabat-ha min il-akher. After all, it's all B.S., so m
Post a Comment
Read more