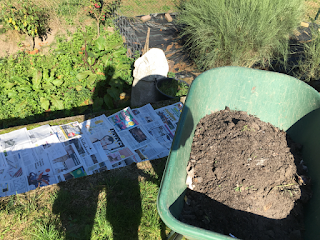 My first Mulch
(reposted from website blog... trying to get things back on one blog....)
It is autumn. The crops in the front garden beds have been harvested and the exposed earth is already hosting a number of weeds. It’s time to prepare for the winter… it’s time to mulch.
If you’ve never heard of mulching, don’t worry, neither had I till a couple of months ago when I began my journey in the wonderful world ofpermaculture: A perfectly efficient system that strives to use the least amount of energy to produce the optimal yield, providing favorable conditions that allow nature do its work so that you can do less.
Starting from the bottom up:
Everything begins with a good foundation, which in the garden means healthy soil. The soil on our land is very poor, and although I succeeded in producing an abundant harvest of fruits and vegetables this year, it’s been a lot of laborious watering and a constant stride against weeds and opportunistic plants. I did not know that weeds come to restore the nutrients to the earth. I saw them as pests and spent hours in what I called ‘weeding meditation,’ only to find new weeds of another type replacing them. I did not know that when soil is healthy, it is actually the best place to store water, reducing the need to manually water to a minimum even in the hottest of climates.
I have to fix the soil, and according to permaculture, they key is mulching, which consists of layering organic matter directly in the garden beds.
The book Gaia’s Garden, which is serving as my introduction to permaculture, gives a recipe for the super mulch, which is composed of several layers and includes soil fixers. There’s a lot I still don’t know about the soil on my land, like what it exactly needs qua nutrients, so I decided to start simple. And the way I am looking at it, any mulch is better than no mulch at all!
I found contracting information about whether to weed before mulching or not (Stay tuned for the entry To weed or not to weed.) I chose to follow Gaia’s garden instead of the various youtube films. I did not weed first. I just slashed and stepped over the little helpers (only pulling out thick stalks that would puncture the newspaper.) It made sense to me that the roots and dead leaves would serve as food and shelter for the creepy crawlies and thus produce healthier soil (reducing the work I needed to do was also a plus.) My first mulch consisted of the following:

The front garden where I began my mulching experiment consisted of two raised beds of about 1 X 7 meter each. While the temptation was high to ‘get it all done in one go’ – I started with one bed. My decision turned out to be wise. My energy was just enough to complete one bed before needing a break. Doing one thing and completing it is better than doing two and leaving them half complete. Thus said, I could not help but mulch around the strawberry bush in the second bed that kindly asked me for a blanket.
It took me about 3.50 hours to complete my first mulch, from gathering the equipment, to flattening and cutting the weeds to bringing in compost (the most time and energy consuming activity in this process) and then covering with straw and finally setting a contour of thick rotting tree trunks. The tree trunks held the newspaper edges down, they beautified the bed and added another source of slow compost that further diversifies the soil (the worms love hanging out under the rotting wood.)
My first mulch cost me less than 8 euros – for the straw. I did not have enough leaves for a top layer on the grounds – not yet. There will be many leaves later in the autumn and those will be added to another sections of the garden. 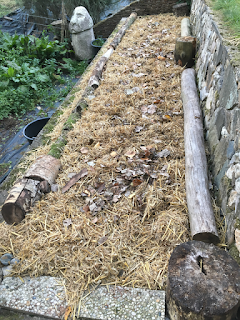 Observations:
The compost bin was about 20 meters from the house door and 20 meters from the two garden beds. It was out of sight and that’s nice, but it’s definitely not efficient. You can say it’s ‘good exercise’ but it’s just a waste of energy – and you have to fight all the insects that jump on you with delight while transporting it. By the time I finished the second bed, the compost bin was empty and l moved it to the corner of the bed next to the path. While I will try to plant the beds in a way that produces mulch from the plants themselves, I suspect I will always benefit from adding some compost here. The distance between the compost bin and the house remained the same – and it is  ‘on the way.’ Handy.
Pleasant side-benefits of mulching:
The idea of using newspaper as the first layer to stop the weeds is superb! My husband reads two newspapers a day – you can imagine how much paper that is. The Gemmeente does not pick up paper in our area– we’re a bit out there in the forest. So my husband usually drives ten minutes to drop it off. Waste of energy and effort. Mulching solved a big problem, at least during the time of mulching. It also saved time and gas. If I start collecting the newspapers even earlier, I could be more generous with how thick I pile them (and I can mulch everywhere...and on an 8,000 m2 plot of land, there's no shortage of space!) I suspect that the layers I put in the first bed might be too thin… The soil here gets really wet in the winter season. We’ll see how it works out this year.
Straw:
I wondered if the straw would stay ‘down.’ I did spray it with water immediately after placing and rain was forecasted. The beds are somewhat protected – they are in a little valley, but the wind can blow very hard. And what about the animals? I suspected that the dogs will go there immediately enticed by the smell and dig things up. (And yes, the little one, Kafka, sure did. I forbade it and it stopped.) As for the cats, I didn’t see them there after the mulching even though earlier they thought it was their toilet (but one never knows what cats do when unobserved.) And how about the foxes? The birds?

Popular posts from this blog

November 06, 2009
The wind doth deceive me and your voice I hear in the tree shrubs Possessed am I with your eyes They pierce my womb and into earth's core I fall to your embrace عشقٌ وجنون Smile to me For you I set my eyes on fire With the lashes of your eyes Hide me in the wallpaper So I can stay near you Unseen
1 comment
Read more

Challenging Tradition in a Traditional Society #1

March 18, 2009
There are some traditions that are worth upholding, but many have collected thick layers of dust so opaque that we can no longer see what was once beneath them. We mistake the dust for the essence, incessantly complaining about a'raf and wajibat, the rights and wrongs of our forefathers...but we play along to avoid ridicule and choose the chains of cowardice, prejudice, and misconception. Ignorance. I am not saying that all traditions are outdated and useless-far from it, in our Arab culture are jewels and treasures, and I am the first to call for preserving them. But let us stop for a moment and consider what we are heeding, rather than following blindly like grazing sheep. Sheep and goats: I am reminded of kindergarden and a song we learnt in school. The teacher would walk around the classroom singing: Ya Ganamati . And we'd respond: Ma Ma . ...Ghannou waraya : Ma Ma ..and so on and so forth. Very endearing, but also very telling. We grow up, Ma Ma-ing until we reach the
1 comment
Read more

The elections: A short lived drive ....

November 05, 2010
Disclaimer: I'm paraphrasing and making generalizations. "Voting is not a right, it is a duty!" I sign out with a slogan, to later realize that I missed the registration deadline and therefore can't vote, neither 'present' in Jordan nor 'absentee' in the US. My political naz3ah came too late. "Nonetheless," I told myself "I'll still follow up on the local campaigns, to learn about the political games." But overnight, and as the landscape of the city changed, I was completely turned off. My political naz3ah did not last too long. At first, I was entertained by the ludicrous slogans, photoshopped pictures and contrived smiles. It made traffic bearable, and even amusing at times. Some confirming the unspoken divides and others playing the religious card; slogans with questionable connotations, and my favorite, "nothing to say". I take my hat off. The woman jabat-ha min il-akher. After all, it's all B.S., so m
Post a Comment
Read more